Phonological analysis: a journey of accuracy! 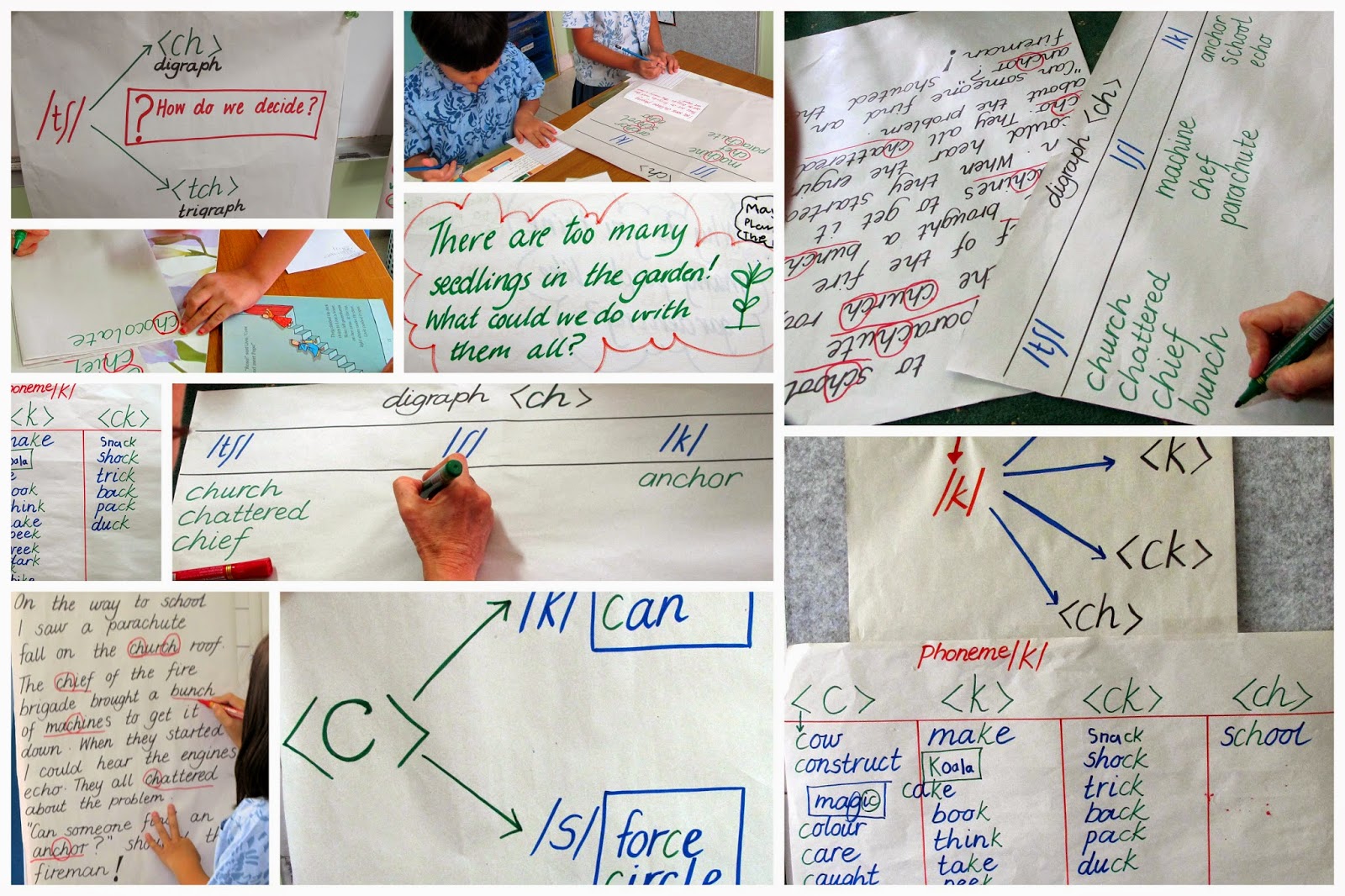 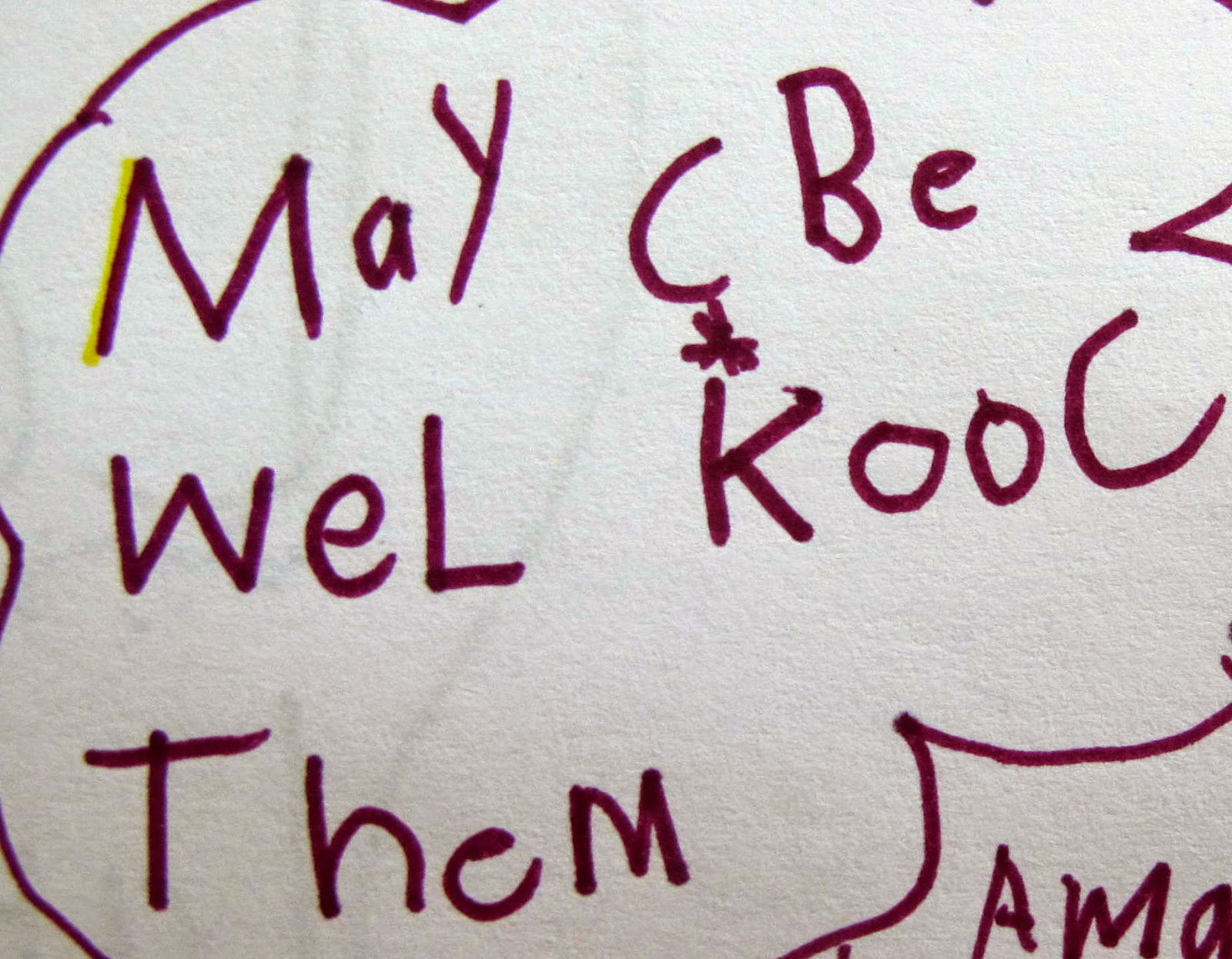 ...when first analysing these pieces of writing, and other examples, you might ascertain that this child has some learning issues...However, I wonder if this student's misspellings and inaccurately formed letters could be a misunderstanding of how the English system works?  Is this student doing exactly what she has been taught to do?
It's our responsibility as educators to ensure we teach accurate information about how the English spelling system works so learners can make informed and meaningful spelling choices.
This child's spelling attempts led to an incredibly rich investigation of a variety of significant graphemes and phonemes used in English spelling.
...some, but not all of the goals to begin the journey.

As a whole class we embarked on a phonological journey;
a journey embedded in orthographic understanding.
Where did I source the words?
From the children's own writing! Each day as the children arrive they respond in the written form to a question such as this: 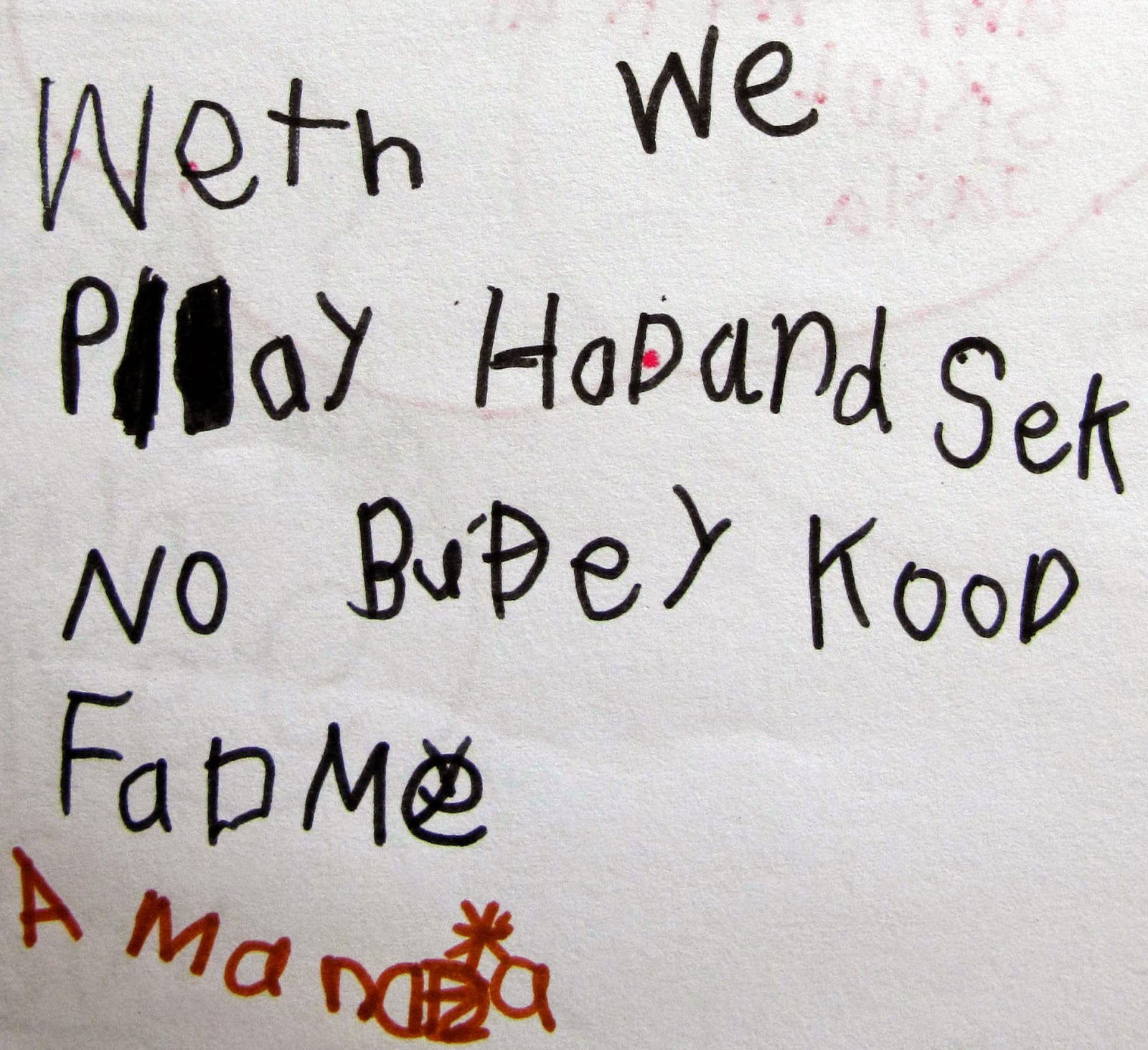 To begin the journey...
As the starting point or 'meeting place' for this phonological journey I presented a significant selection of the misspellings to the children:

We embarked on a phonological journey investigating how to accurately
(L. 'to take care of') represent the phoneme /k/ to cure all previous misunderstandings!

We started with a basic phoneme chart showing how the phoneme /k/ can be represented by the single letter graphemes <c> or <k>.
Mostly, the children knew this information (but did not understand why) and were able  to provide lots of evidence  with known words. At this stage they couldn't justify why some words were spelled with the  single letter grapheme<c> or <k>. Currently, for many, it was a random choice, generally choosing <k> to represent the initial phoneme /k/.

...and so our journey begins.

Also, I began to explicitly embed  <grapheme> <phoneme> <digraph> <trigraph> <initial> <medial> <final> in my own language as I modelled and clarified the children's thinking. The slash brackets / / and angle brackets < > were also introduced and consistently reinforced throughout the learning process. 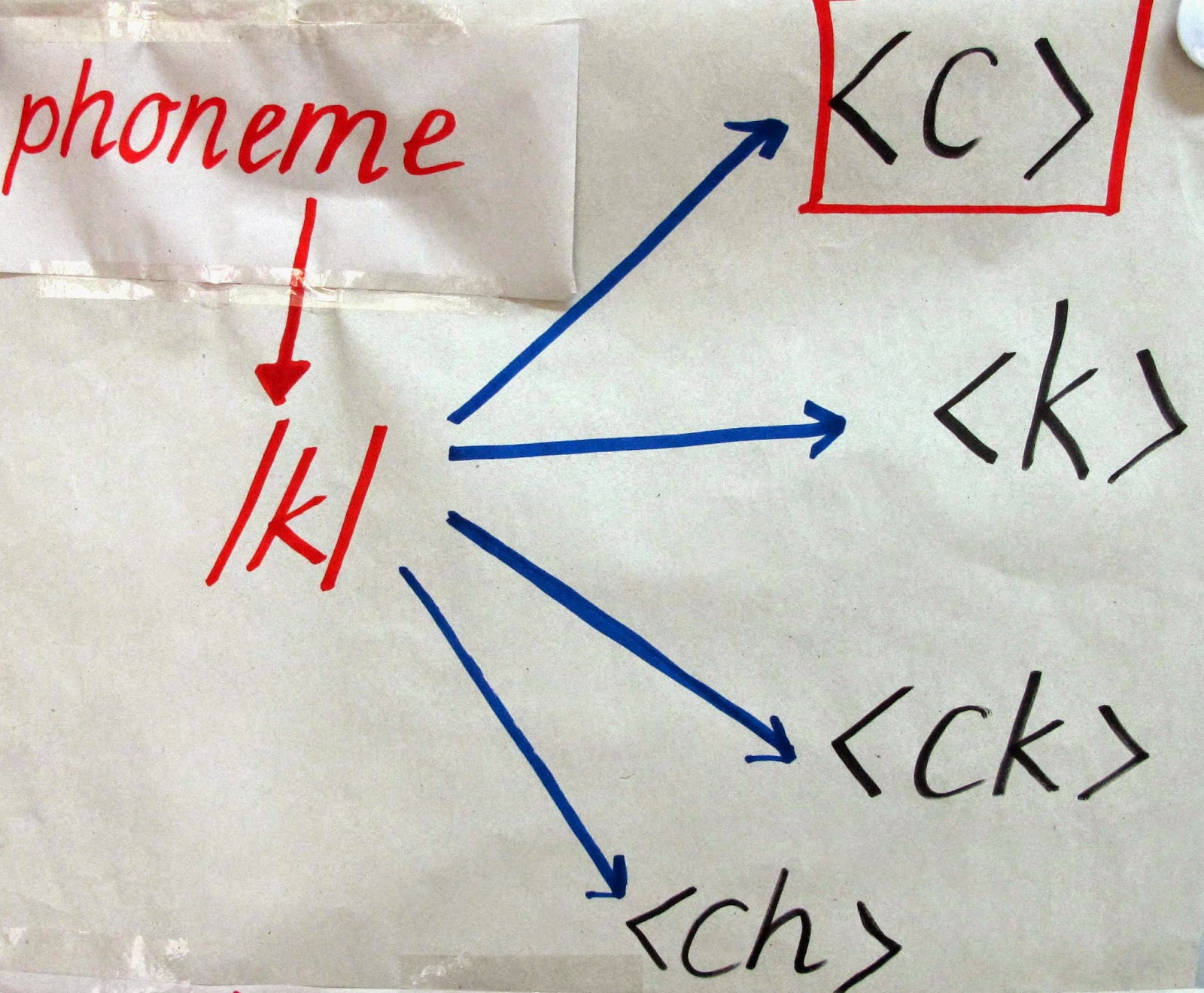 As I predicted, the children suggested that the digraph <ck> could also represent /k/, providing some examples for evidence. This phonological piece was then added to the chart.

As a learning reflection I added an additional arrow to the chart and asked the children to think about another grapheme that we can use to represent /k/. I now wanted the children to have independent time to conduct their own investigation and begin to collect words for evidence. 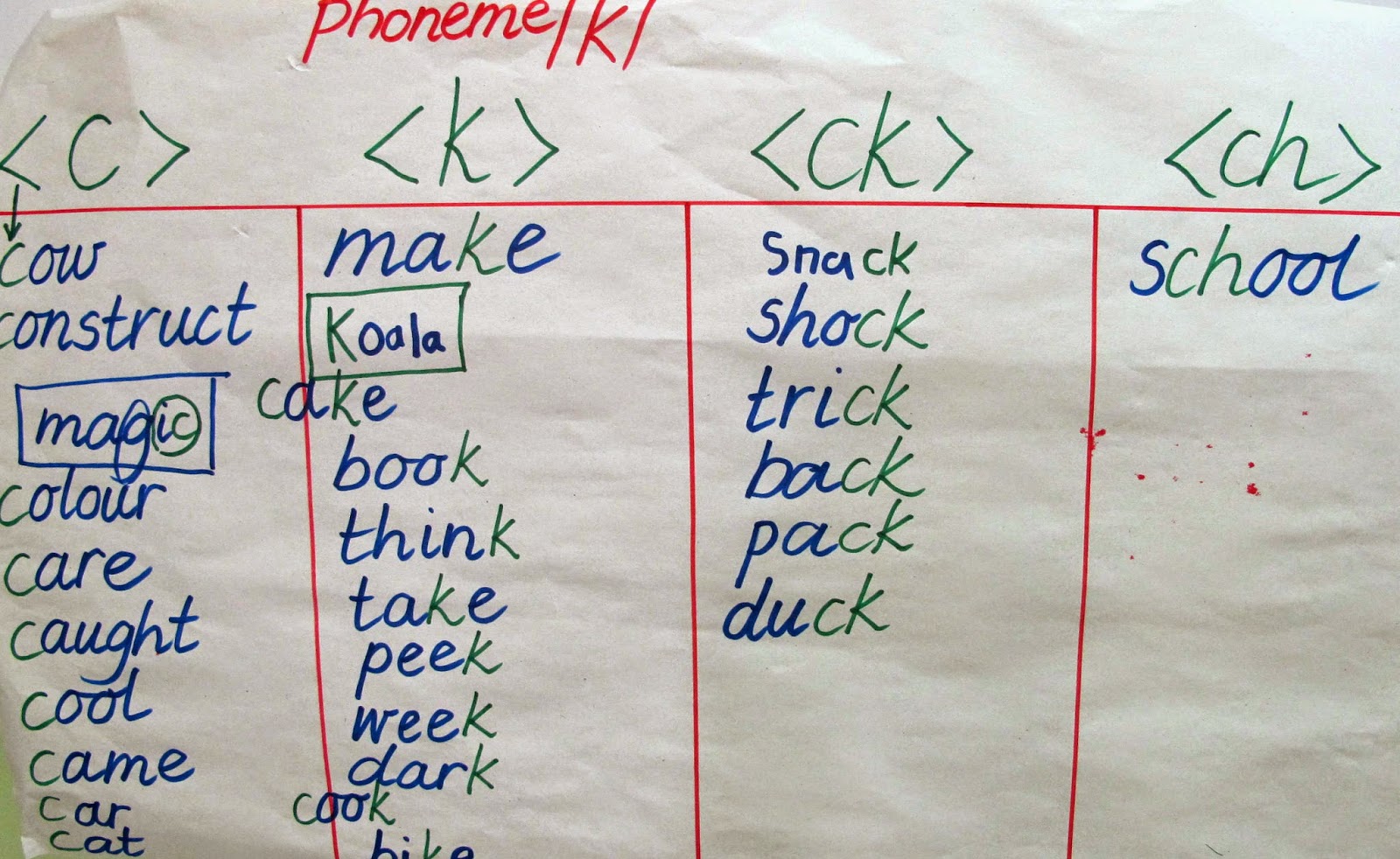 Continuing the journey...
I provided a large blank chart for the children to record their words as evidence of the different graphemes for the phoneme /k/.
In the subsequent days we did a variety of activities. The children were 'word detectives' hunting for words that contained a grapheme to represent the phoneme /k/. As the children identified the words, they recorded them on a post it note, which I transcribed onto the larger chart. I wanted all the words spelled accurately and it gave me the perfect opportunity to model accurate terminology; as well as to model how to track the phonemes and discuss the circumstances of the grapheme as each word was added.
Through this activity they eventually discovered the fourth digraph <ch> (a surprise to many, even though they knew the spelling of <school>!)

This provided an excellent study in terms of helping and guiding the children to understand:
The children discovered independently the circumstances in which the graphemes may be used in a word, drawing conclusions about the specific placement of the different graphemes:

From their discoveries the children hypothesised that: 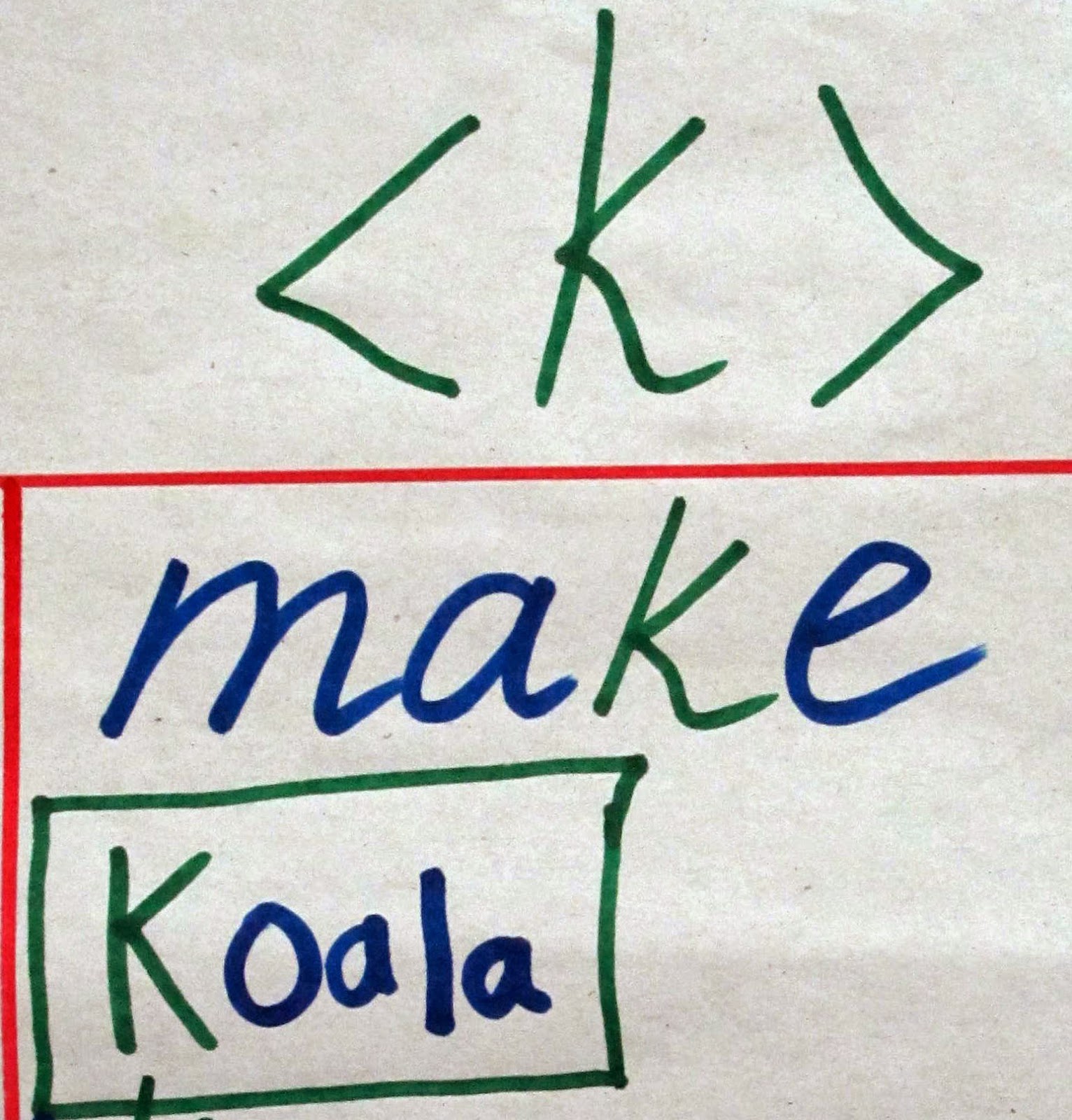 I wondered with the children... why the digraph <ch> was not a common grapheme to represent the phoneme /k/. This led to an investigation about the origin of <school> using the Word Origin dictionary, (Greek origin). We also studied the words <magic>, <construct>, <koala> and I guided the children through an initial understanding of these words. Some of the words they collected were complex words (not bases) like <construct>; and others provided an etymological investigation like  <koala> which is an Australian word from an extinct Aboriginal language, hence the spelling of the initial <k>.
With all this information the children can now begin to make more informed decisions about grapheme choice.

There are many words such as <caught>, from this rich list that I could have chosen for us to study further but it is important to focus on what is relevant for the learners now. Other words can be extracted for deeper exploration in the future.

An important side trip! 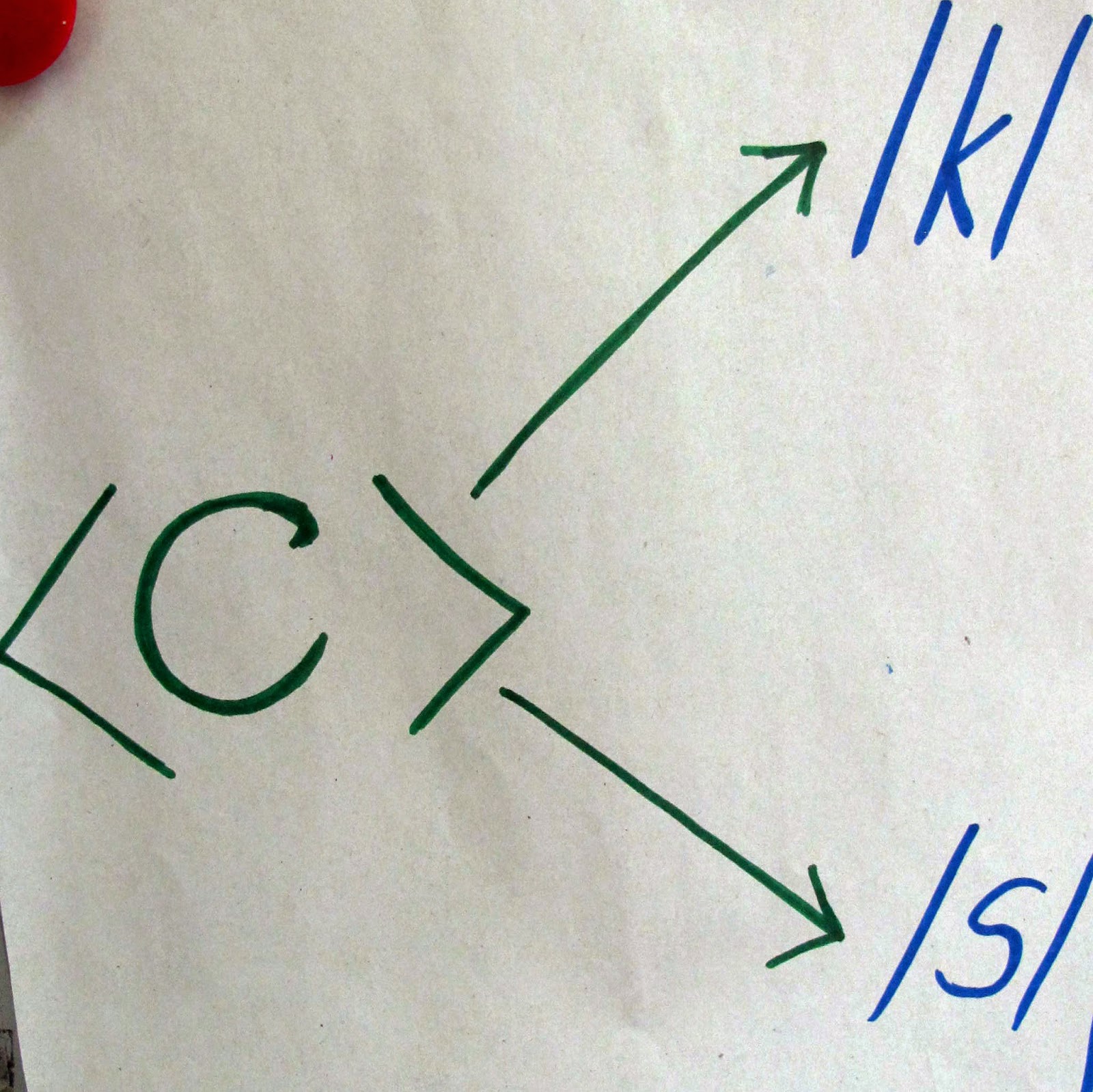 As a result of the children's word detective investigations, we were led on another, but connected, phonological journey.

Some children had chosen these words  <city> <circus> and <cycle>  to place on the phoneme /k/ chart. An excellent misunderstanding to investigate.
I modelled tracking the initial phoneme in these words and they discovered that <c> can also represent /s/.
We constructed another basic chart; this time starting with a grapheme <c>.

Due to their findings we were able to hypothesise that <c> can represent two phonemes /k/ and /s/.

As I recorded these two phonemes with the children I continued to discuss the meaning of the slash and angle brackets; and the symbols enclosed. This concept needed revisiting in many ways as possible throughout the learning process.

We identified words, as evidence for each phoneme, adding these to the grapheme chart. We would continue to build on this initial list of words leading to a further understanding of the convention of when <c> represents the phoneme /s/. There is an engaging practical task in the Real Spelling Toolbox that helps children develop an understanding of this phonological convention. <c> followed by <e> <i> or <y> will represent the phoneme /s/. 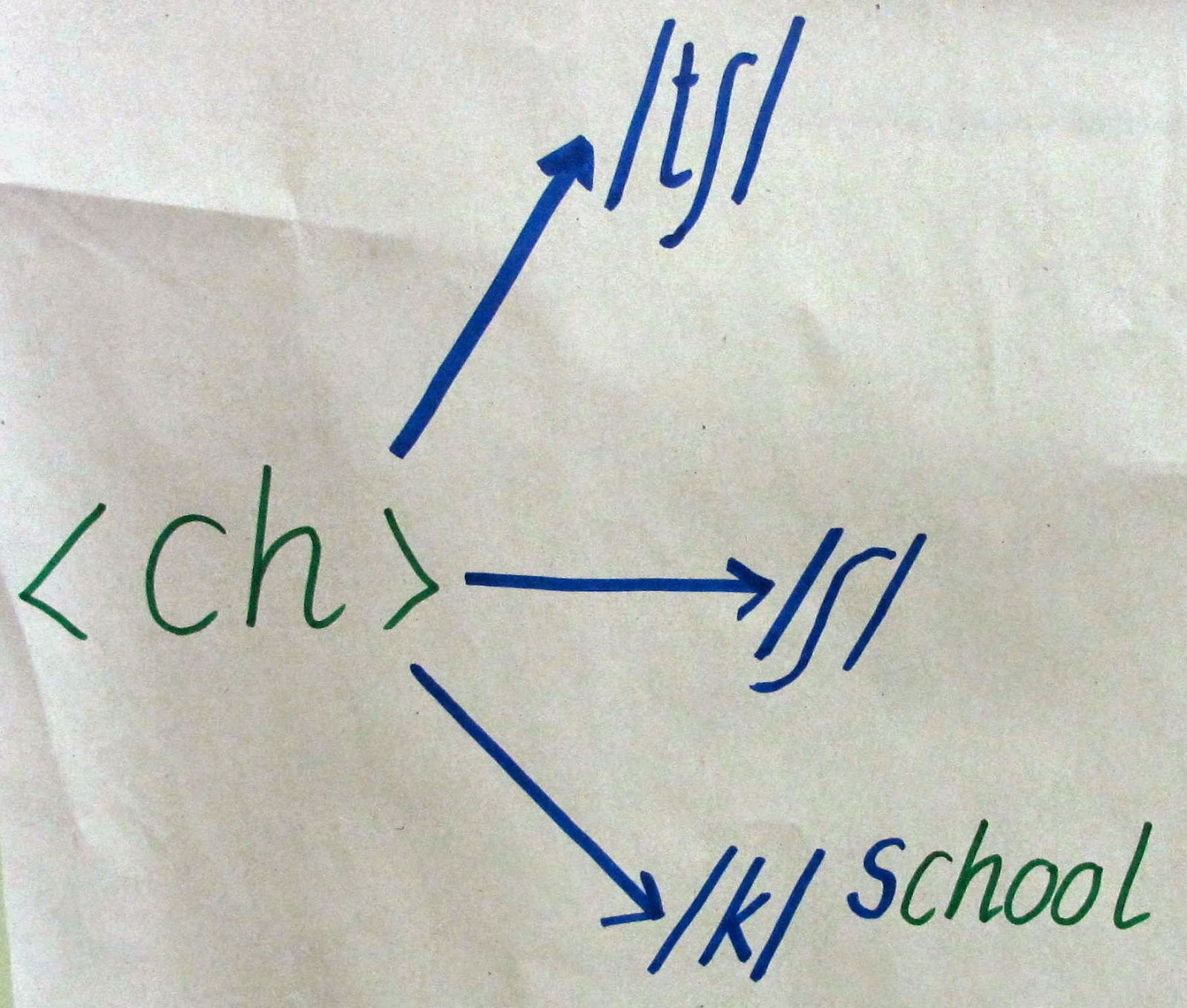 I love that the initial investigation naturally led to many others, often initiated by the children.

As a result of discovering that the digraph <ch> can represent the phoneme /k/ the children started to question and discuss their own understanding of this digraph. For many of the children <ch> only represented /tʃ/, so it was time to lead them further into the 'woods'.

Once again a phonological chart was constructed and this provided a perfect opportunity to demonstrate some new IPA symbols. With a growing understanding of phonemes and graphemes, I ascertained the children were now prepared to be exposed to this new information. I  showed them the phonetic symbol for /tʃ/ and added another arrow (without the symbol) ready for when they discovered the third phoneme /ʃ/. This phoneme was added when the children discovered it independently with the word <chef>. 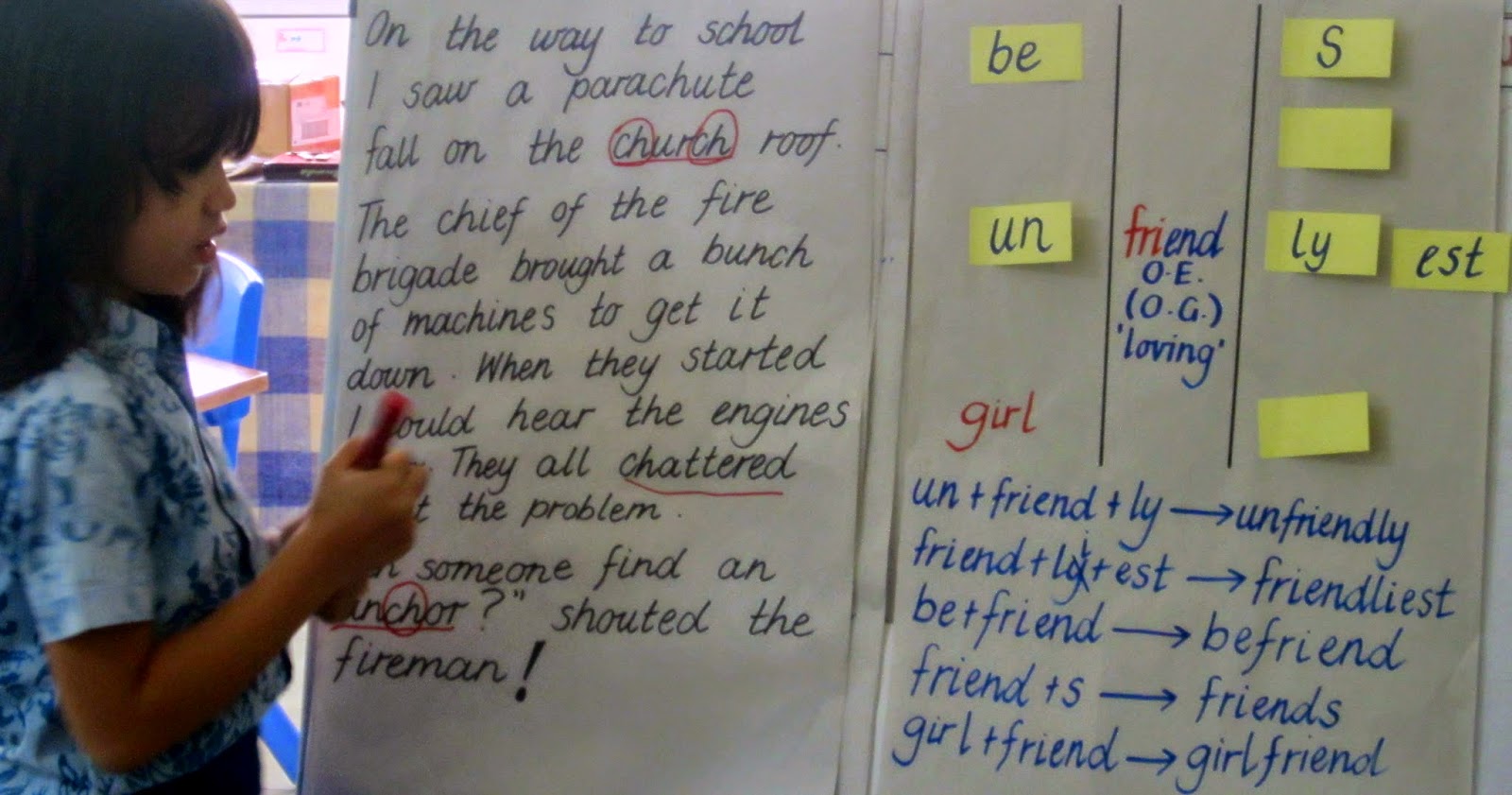 To embed this learning in a meaningful context I constructed a paragraph, through modelled writing, based on our current PYP unit of inquiry. I deliberately added words that contained the <ch> digraph.
The children's task was to identify the words with this particular grapheme.

We always read the words in context, discussed their meaning BEFORE identifying and circling the digraph <ch>. 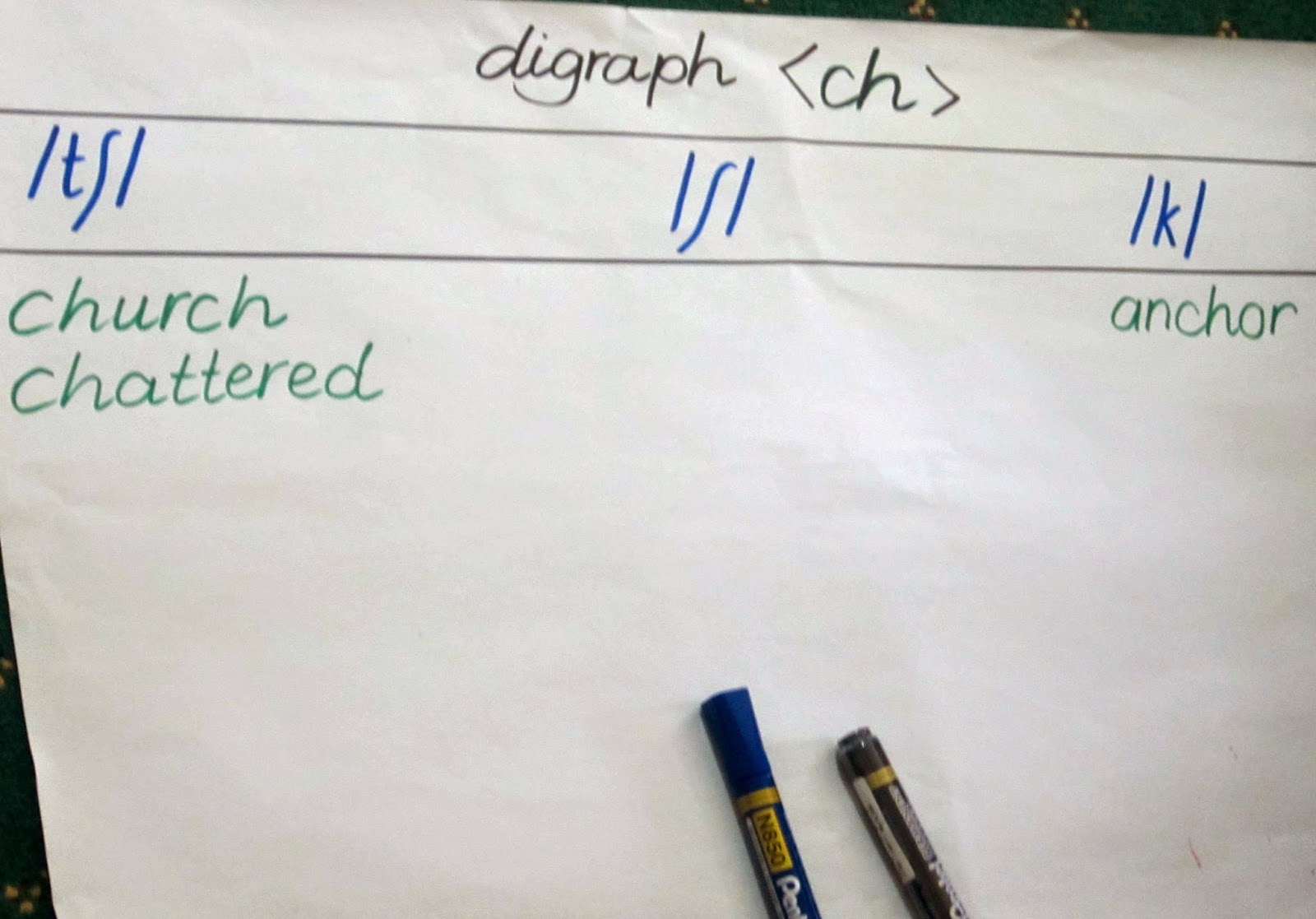 The words were then added to a grapheme chart I had prepared (with the children), again modelling important terminology and orthographic concepts, including the morphemic structure of the words. 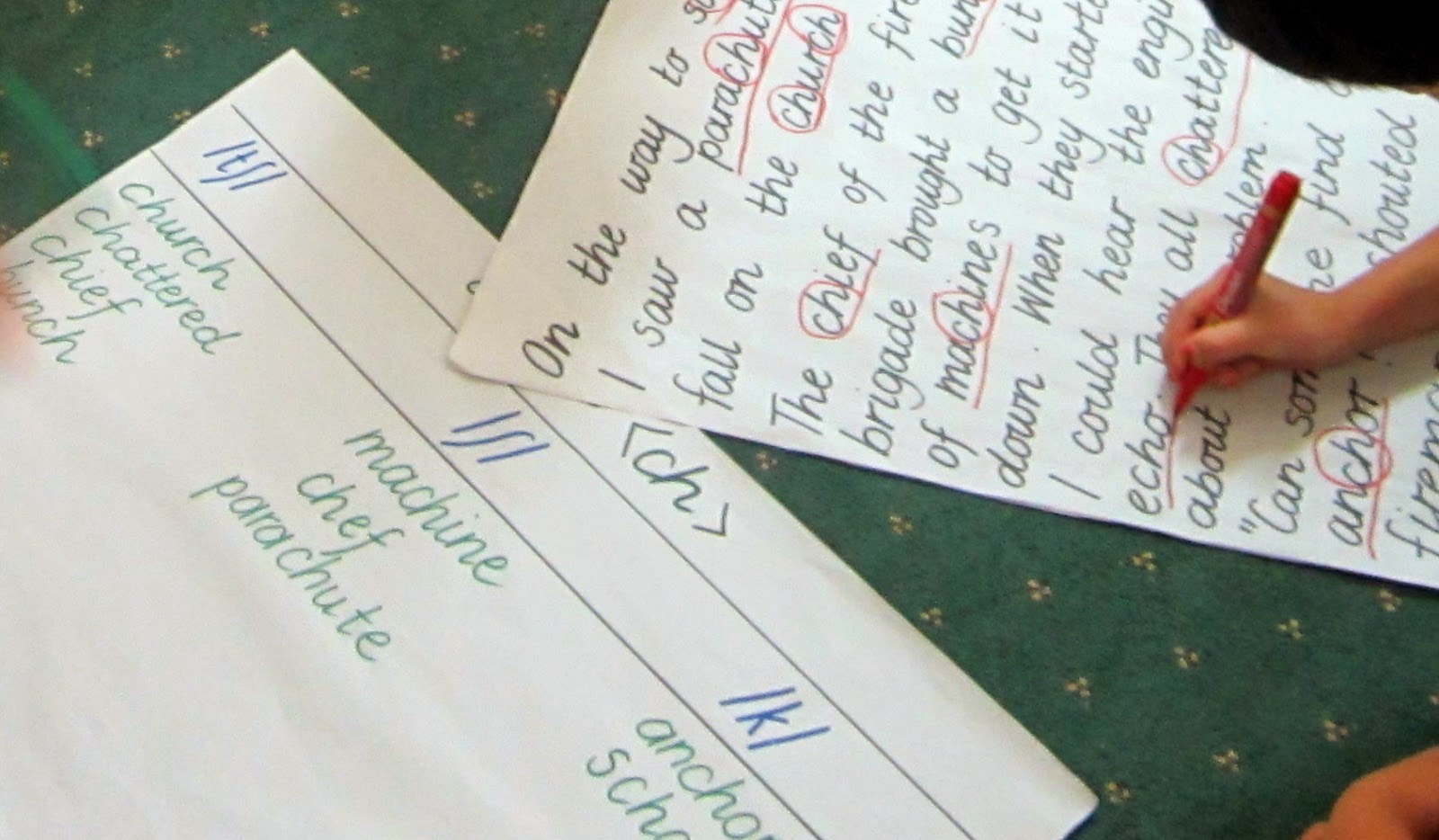 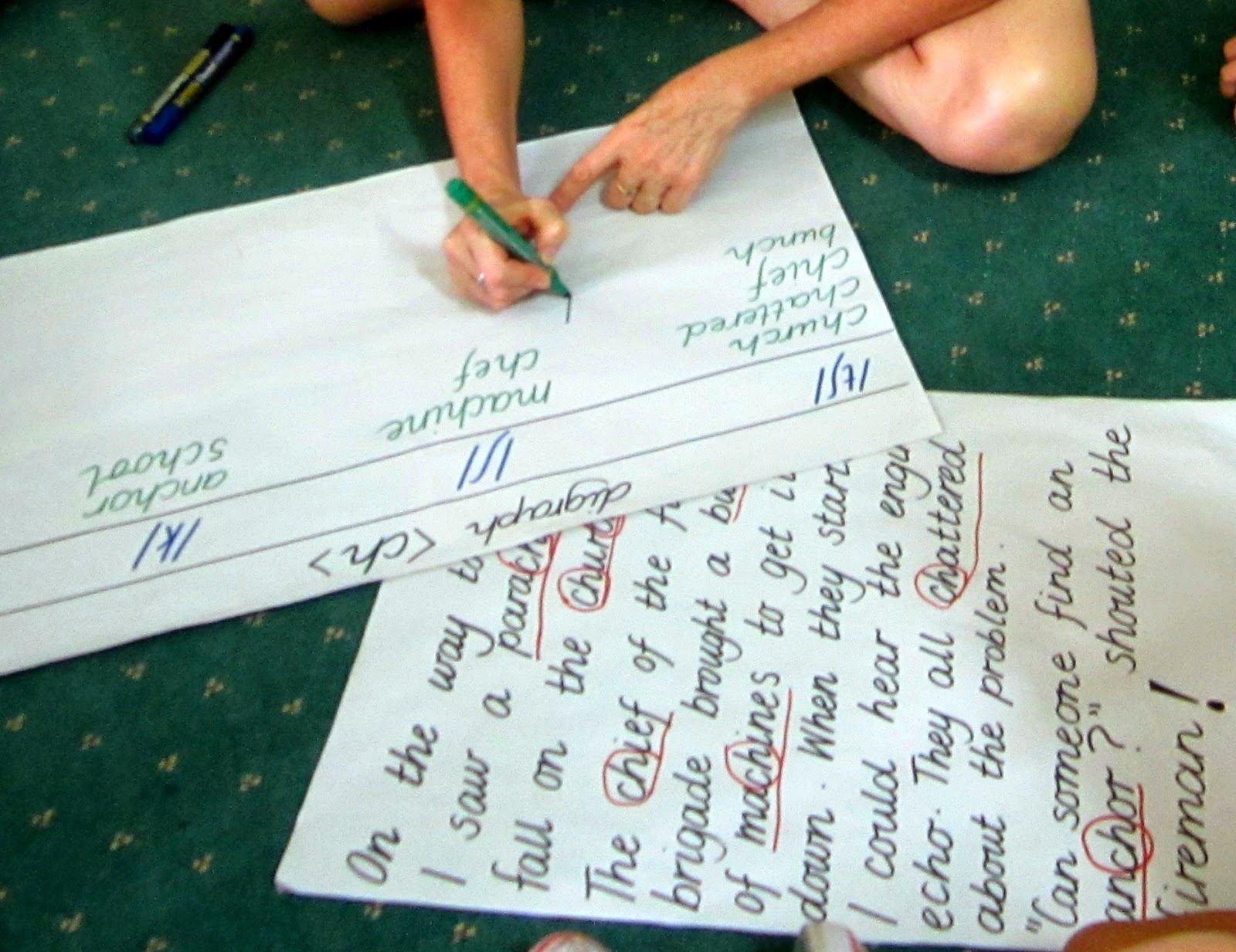 The children recorded the words in the appropriate phoneme column. We discussed the circumstances of the grapheme, hypothesising how the grapheme was used in terms of position,etymology and phonemic information. Our next step will be to investigate more deeply the etymology of these words to build an understanding of the importance of this information. For example; words where <ch> represents /ʃ/ generally means French origin.

Another important side journey during this learning process was to demosntrate how to script the letters more accurately. We used the graphemes, under investigation, to demonstrate how to execute the correct pathways for each letter. First we practised the pathways of the letter on the palm of our hands, taking special note of the entry and exit points and size. 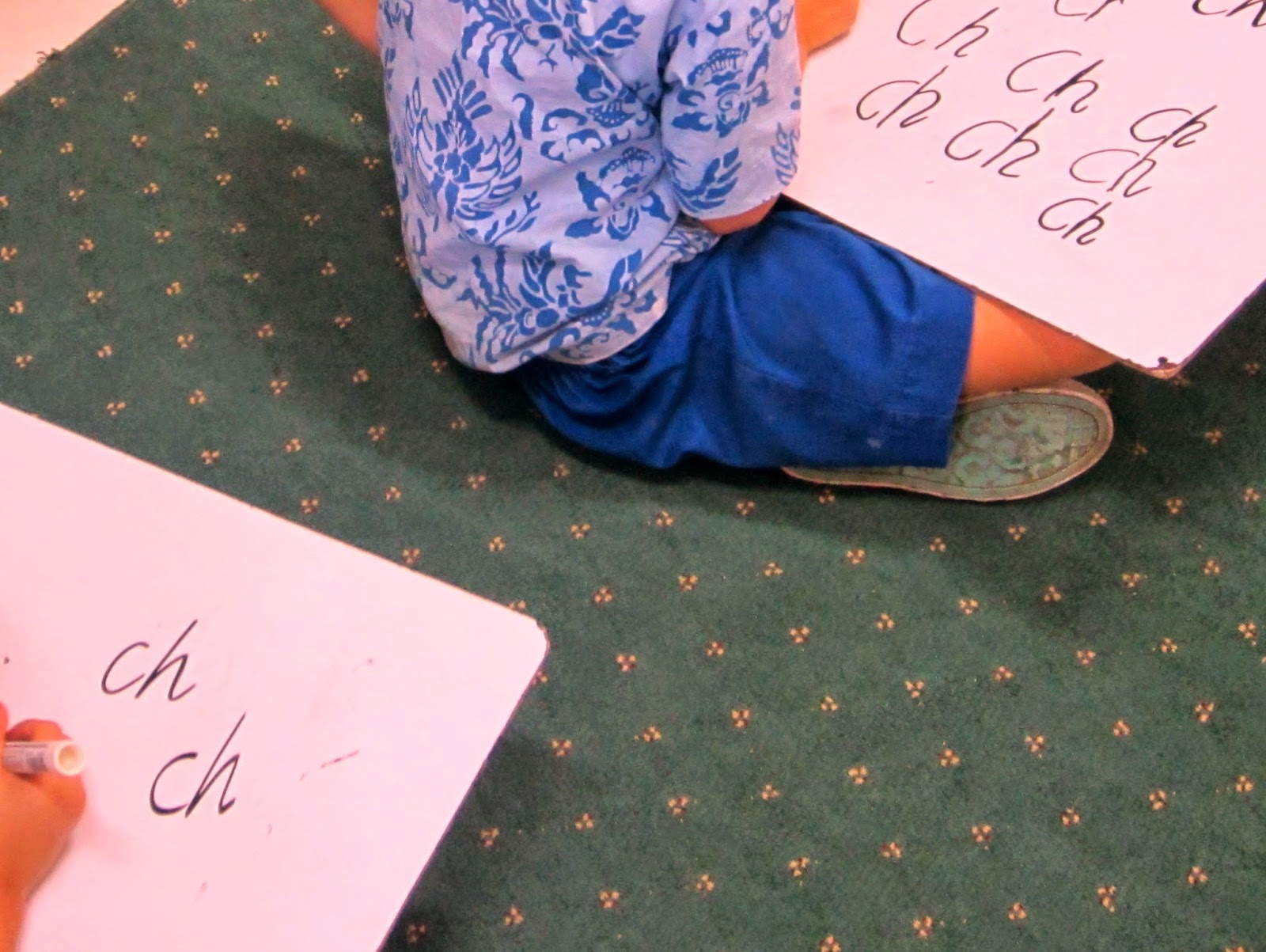 If you have the opportunity in your school I highly recommend implementing Real Script (Real Spelling), using pens as the preferable writing tool.

And our journey continues... 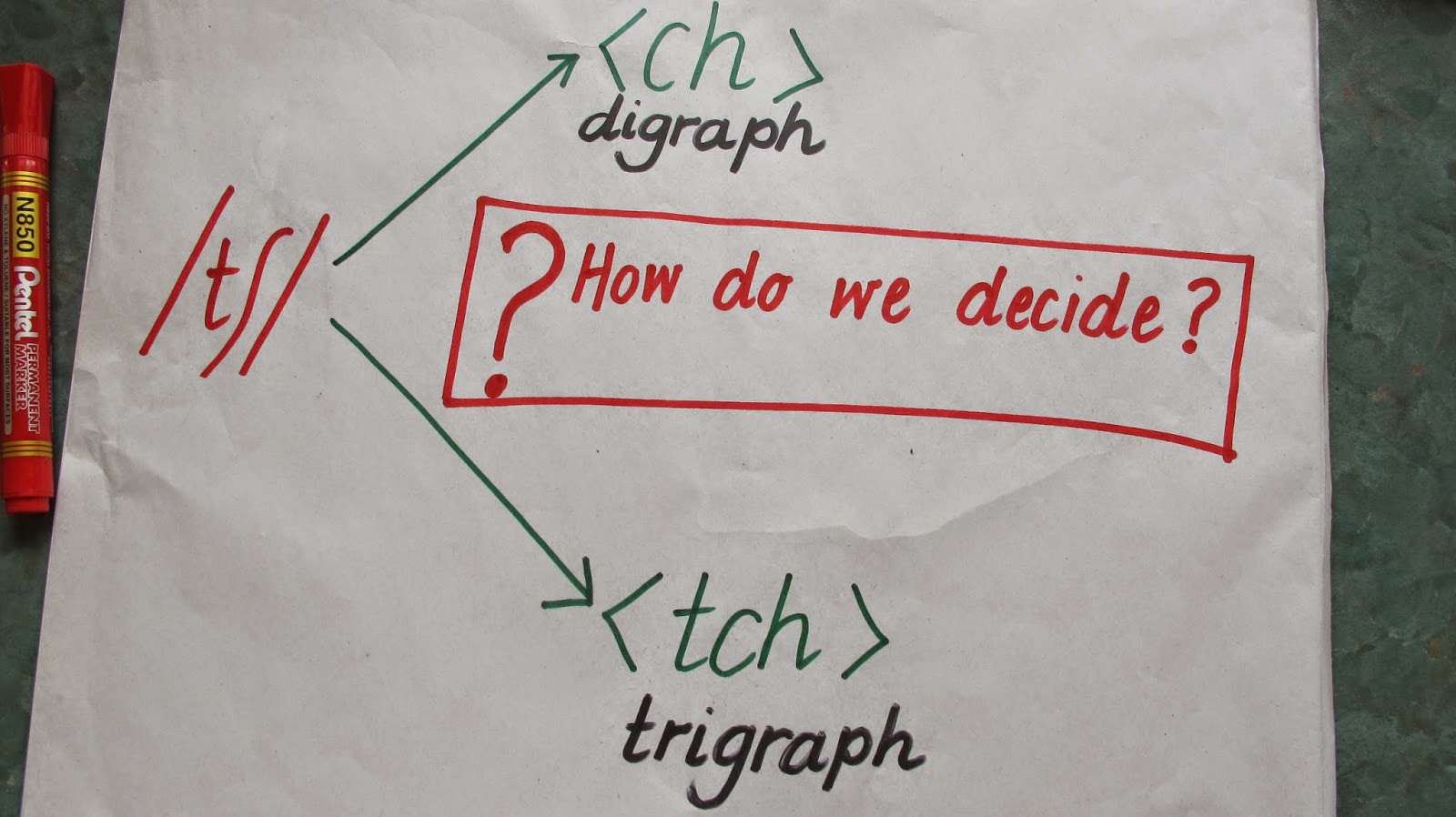 The children have now discovered that /tʃ / can be represented in spelling by either the digraph <ch> or the trigraph <tch> by identifying the word <watch>. We look forward to discovering 'why?' as we head further down the pathway of orthographic learning.

A reflection of our journey...
...starting with one very common phoneme /k/, the children have now discovered and investigated: 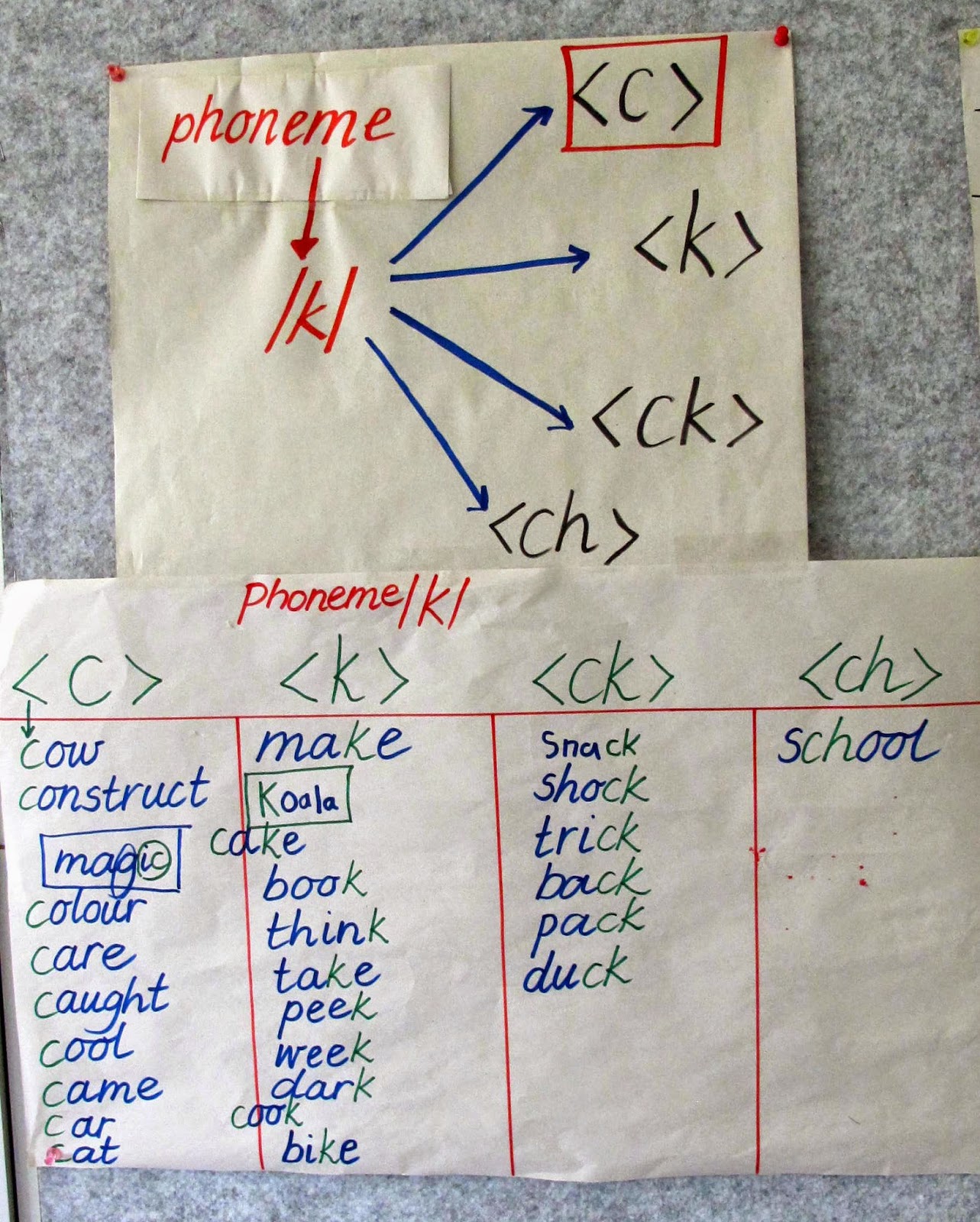 ...quite an impressive feat for a small group of 6 and 7 year olds!

As the children are writing, for different purposes, we are frequently referring to our new phonological learning in the hope that they begin to use this important knoweldge independently.

To deepen your understanding of Orthographic Phonology study the:

Give me a shout!
If you happen to be using my blog please drop me a line and let me know
what you think, what you would like to see, what you enjoyed!
inquiry.beyondtheword@gmail.com