Opening up the mystery box!

Investigating the underlying structure of words through the analogy of 'opening up a mystery box'. 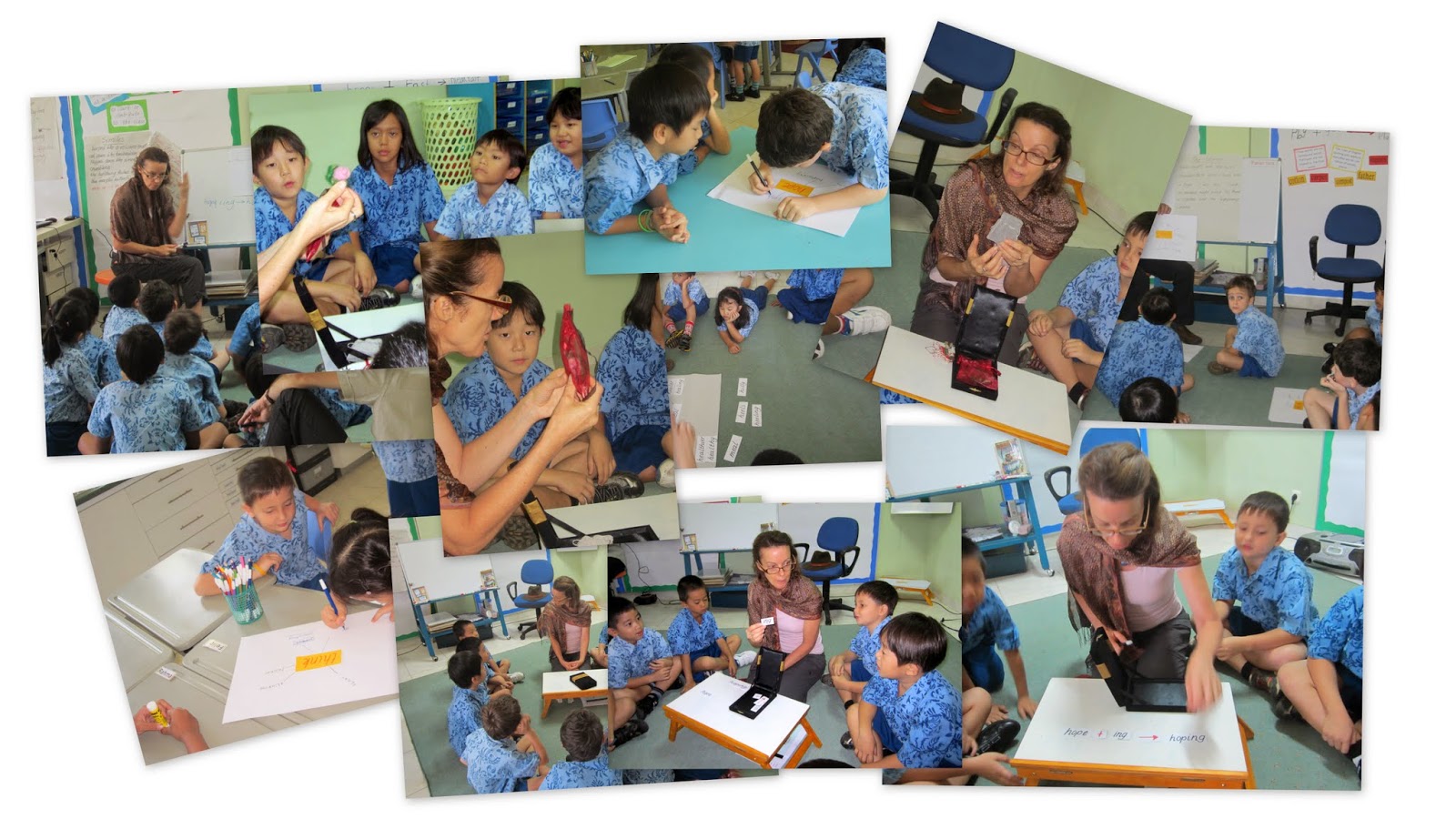 This activity introduces an important linguistic feature, which demonstrates that words have many layers (substructure) that need to be uncovered to reveal the reason for the spelling. Only through careful investigation of these 'hidden' layers can we begin to fully understand why and how words are spelled the way they are. 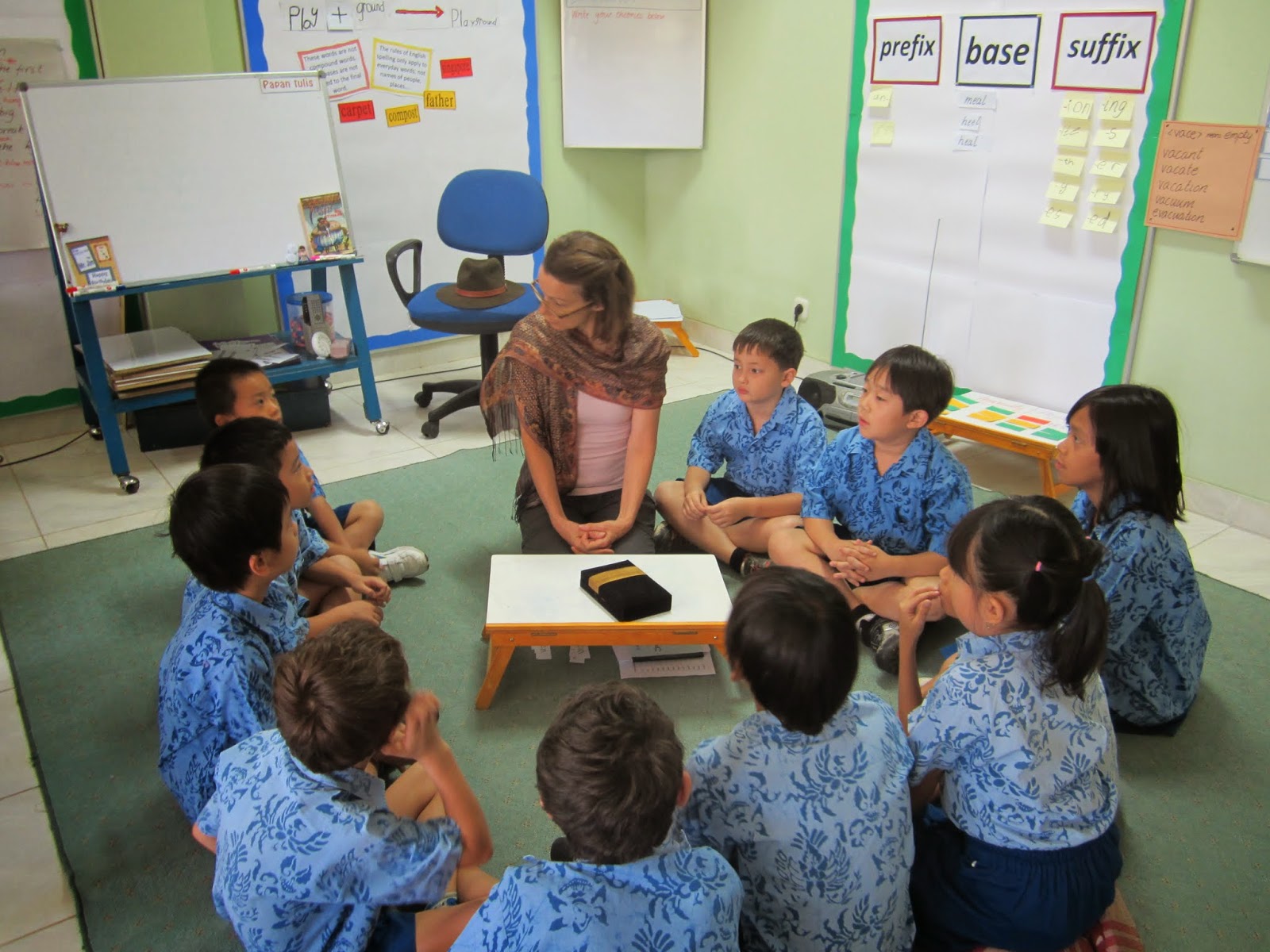 These grade 2/3 students are investigating the underlying structure of words using the analogy of a mystery box. This activity was specifically planned to introduce the concept that words have a linguistic structure that is not at first 'visible'. These students did not have any previous knowledge of how the English spelling system really works.

The answer lies in the MEANING...this may, at first, seem like a simple question but only when you 'peel away' the layers of these two words, through careful investigation and critical thinking, can you fully understand the two different spellings.

Introduction: A closed mystery box was revealed to the students. Inside were some special treasures. An element of one of the treasures (in this case, a piece of red ribbon) was visible on the outside of the box. Based on their observations, the students discussed, predicted and shared theories about what could be in the mystery box. When opened, the full treasure was revealed (a small round stone encased in a red bag with a red ribbon). 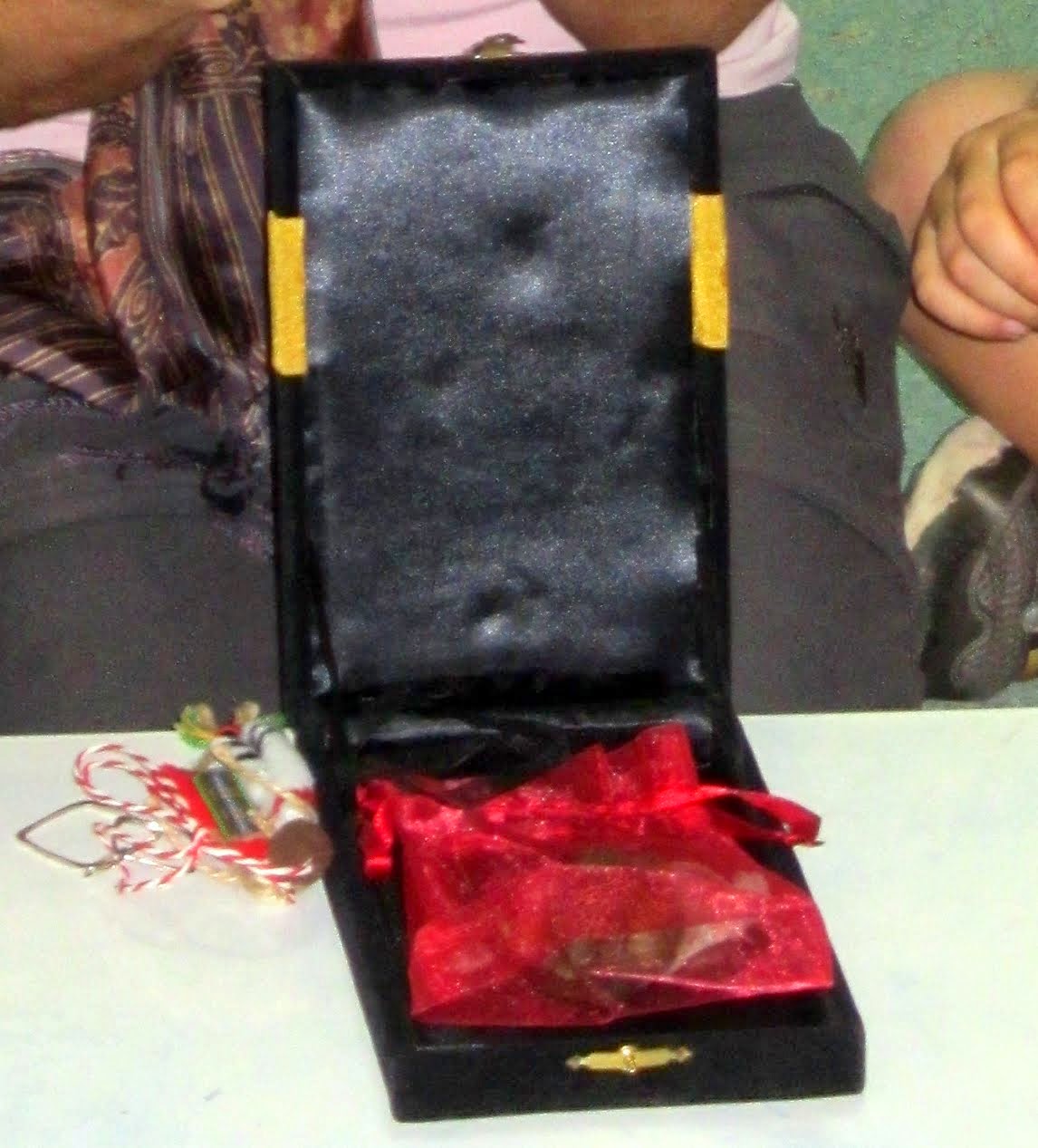 Just like the scenario of the mystery box, English spelling is similar! You have to 'open up' the words to reveal the underlying meaning and structure of the words...that contains the base, the meaning of the word and ultimately the spelling of the word.

"Let's investigate this word <hoping> ... what is hidden inside?"

Just like the hidden treasure, with only a small part visible, the word <hoping> was written on a card and placed on the outside of the box.

Is this word related to <hope> or <hop> the children are wondering?
Why is there only one <p>?
If it is <hoping> what has happened to the final <e>?
These were just some of the questions the students were asking, discussing and wondering.

Each student made predictions, based on their previous knowledge and own understanding. This informal discussion provided valuable information and ongoing assessment for the teacher. 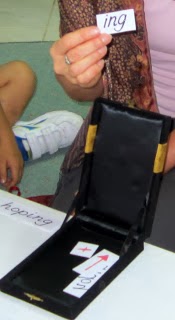 Just like opening up the box to reveal the treasure, the parts of the morphological word sum were revealed when the box was opened:
The students worked together to sequence the word sum from left to right. By building the word sum the students were able to ascertain that the word was <hoping> not <hopping> based on the understanding that the base <hope> holds the meaning. 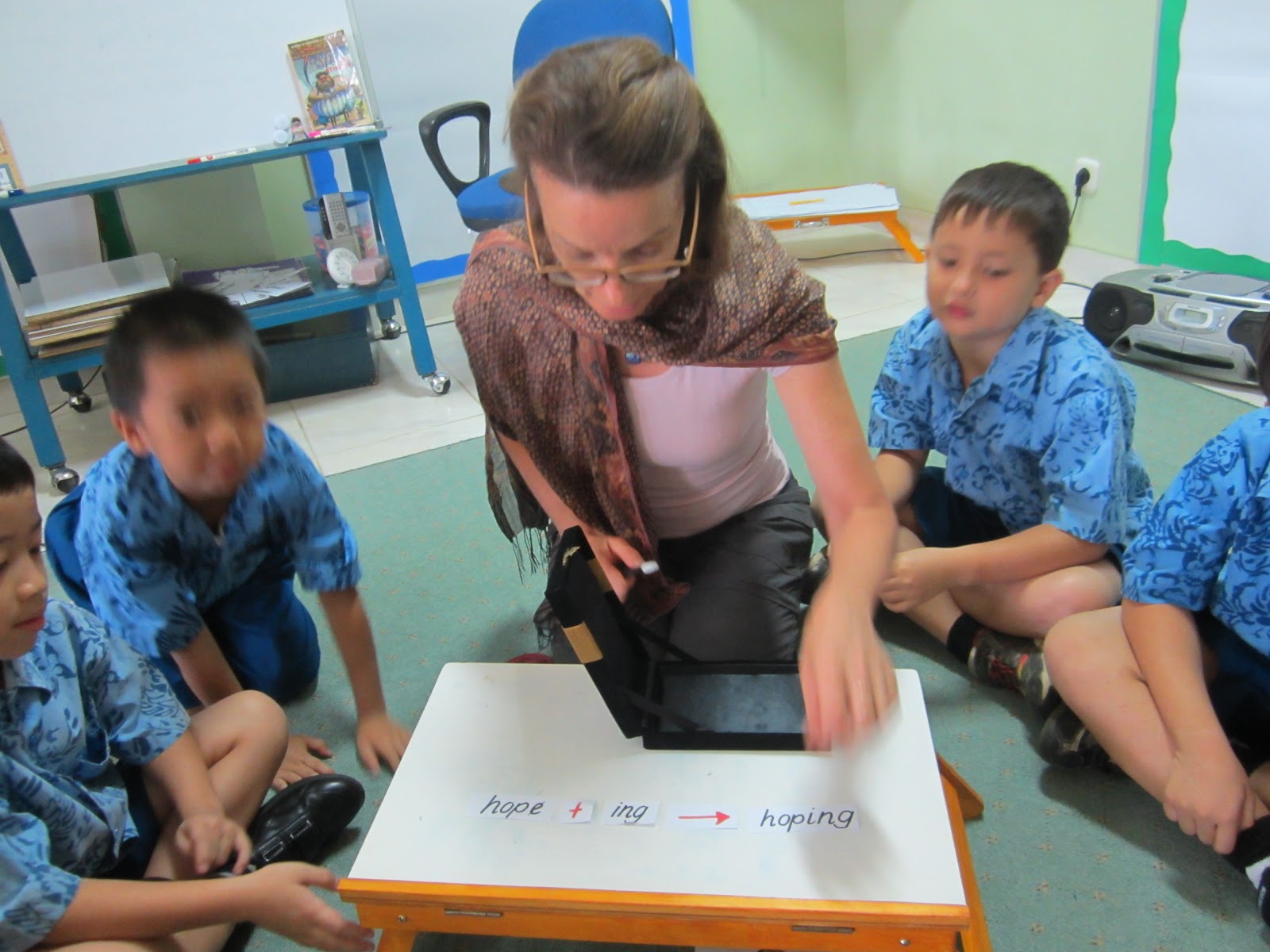 Revealing the word treasure:
hope/ + ing --> h-o-p-(no e)-ing
(announce the parts as you simultaneously write them)

This activity demonstrates the importance of:


The 'hidden treasure' or underlying structure is the KEY to the final spelling.

Please contact me through the comments section or through this link if you would like to continue a conversation about structured word inquiry in the early years.
Posted by Lyn Anderson, Orthographic Educator at Thursday, September 26, 2013 No comments:

Investigating verbs to understand the suffix (-ed) and more...

...in the previous post I discussed some ways to utilise literature, such as big books, to explicitly guide a structured word inquiry. 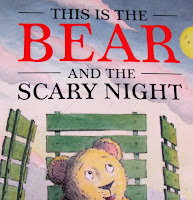 This particular big book, This is the Bear and the Scary Night, uses a wide range of expressive verbs, highlighting the (-ed) suffix to indicate the past tense.
What an excellent way to guide a structured word inquiry into: 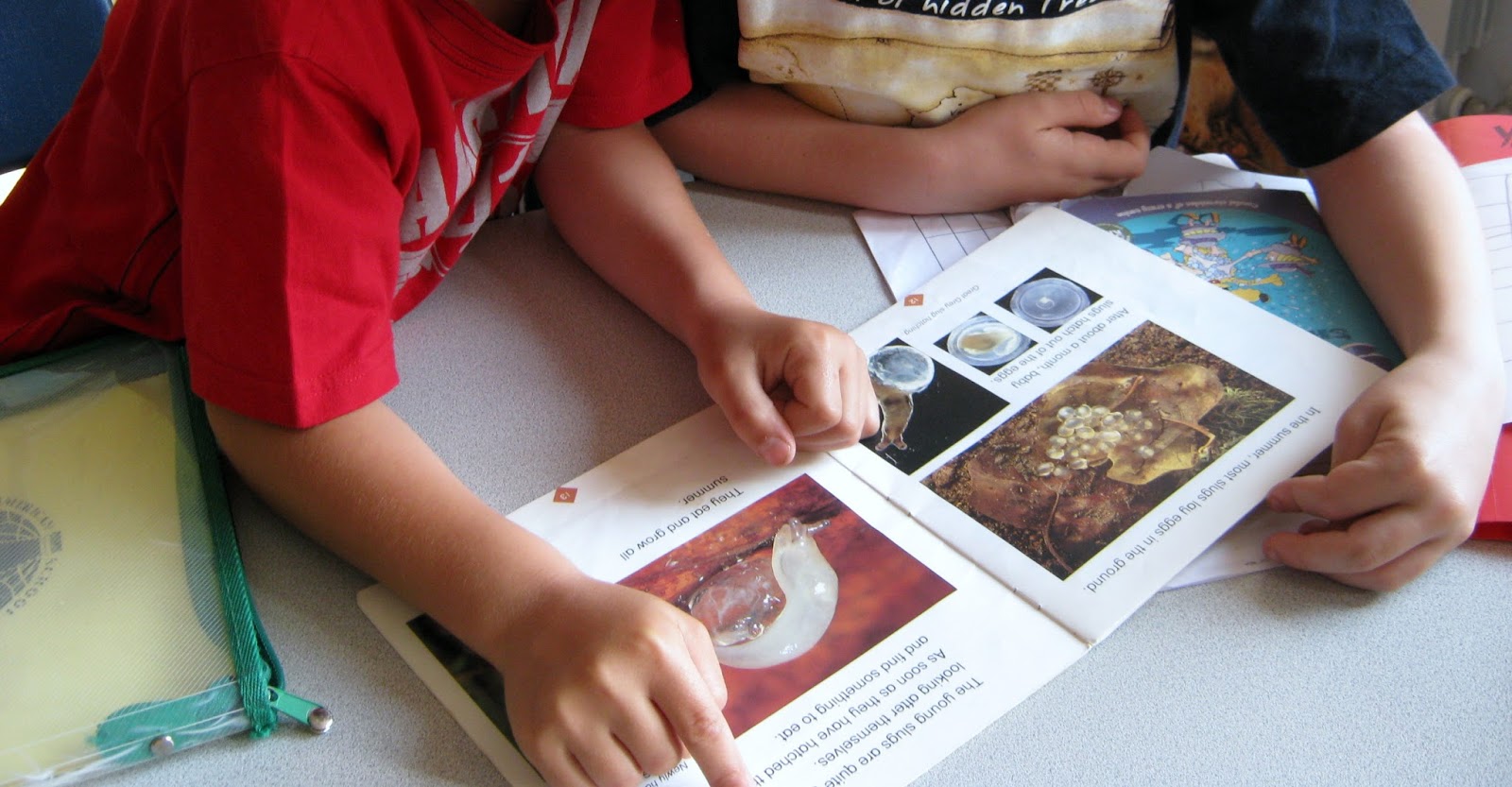 By collecting words, from a range of literature, the students begin to build a chart classifying the words under the following headings, as indicated in the chart below, OR through a concept attainment strategy, in which the headings are revealed after the collected words have been sorted onto the chart by the teacher.
The students are required to establish theories about why the words have been placed in one of the three columns.


An investigation into the three phonemes
that represent the suffix (-ed)


As in the previous activity, the students can also conduct an investigation of the three different pronunciations for the suffix (-ed), in a similar way. The students can add to the chart as they encounter words with the (-ed) suffix or participate in a concept attainment activity.

It is crucial that young children, early on, are exposed to this learning, to frequently encounter the different pronunciations.

This activity clearly demonstrates the essential understanding that although pronunciation may change the spelling will be constant.

Investigating the suffixing pattern for the final, single, silent (e)

To start the learning journey...Identify an investigative question based on the words your class have previously identified:
How can we discover why the final, single, silent (e) is removed in (hoped) and (smiled)?

Generally I write the question on a shared space in the classroom (whiteboard, large chart for weekly word inquiry questions, classroom door). Depending on age and development, the teacher can record the theories and ideas for the children or the children can record independently, ready for discussion and further investigation.
After a few days, the children have an opportunity to share their ideas with each other, through collaborative group activities; in pairs, small groups and with the whole class. In this way all students have an opportunity to 'voice' their opinions and ideas. At this stage, just like in a scientific investigation, we listen, question and accept all ideas.

NB it is interesting to observe, over the space of a school year, how the children's theories became much more coherent and precise.


...to continue the learning journey...identify the underlying structure. The children are given a word, on a small card. Some of the words will have the final, single, silent (e) and others will not.

played  jumped  smiled  hoped
The first task, is to fully understand the meaning of the word by playing the 'trading game'. This game is an activity that supports differentiation and ensures that all the children know and understand the words, to be used for the investigation.
The children are now ready to identify the base and formulate the morphological word sum. To be successful, the children need prior knowledge and understanding of how to write and announce the word sum. The children work out the word sum, share and prove it with a partner and make any necessary changes.
played                               smiled
p-l-ay + ed --> played     s-m-i-l-e/ + ed --> smiled
The words (with the word sum) are then placed on a chart for class discussion and articulation of the suffixing pattern.
...a reflection of learning...to reinforce and consolidate new learning, build a large, group flow chart.
First, discuss the parts (actions, questions, arrows) of the flowchart and read each action and question. 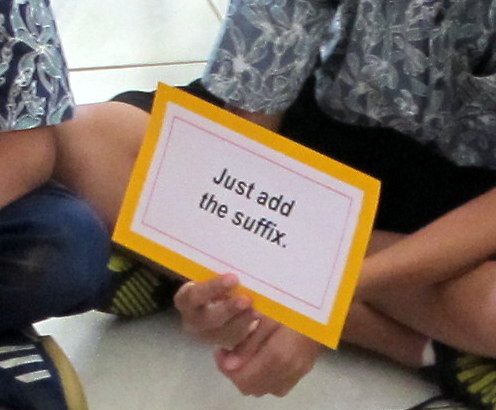 I frequently ask the children to predict the question/s in the flowchart based on their prior knowledge and learning.The children are highly motivated to work together to create the flowchart. This is a significant flowchart to start with as it is relatively easy to piece together.

Once the flowchart has been organised it needs to be tested to ensure it flows in the right direction.

The children are then able to create their own individual flowcharts for independent work. Initially have the children work on whiteboards so they have the opportunity to reconfigure the flowchart if they need to make any changes. I always have the students test out the flowchart before they transfer permanently it to their workbooks.

To support internalisation of the suffixing pattern the children can take home a 'flowchart package' and build it with their families. 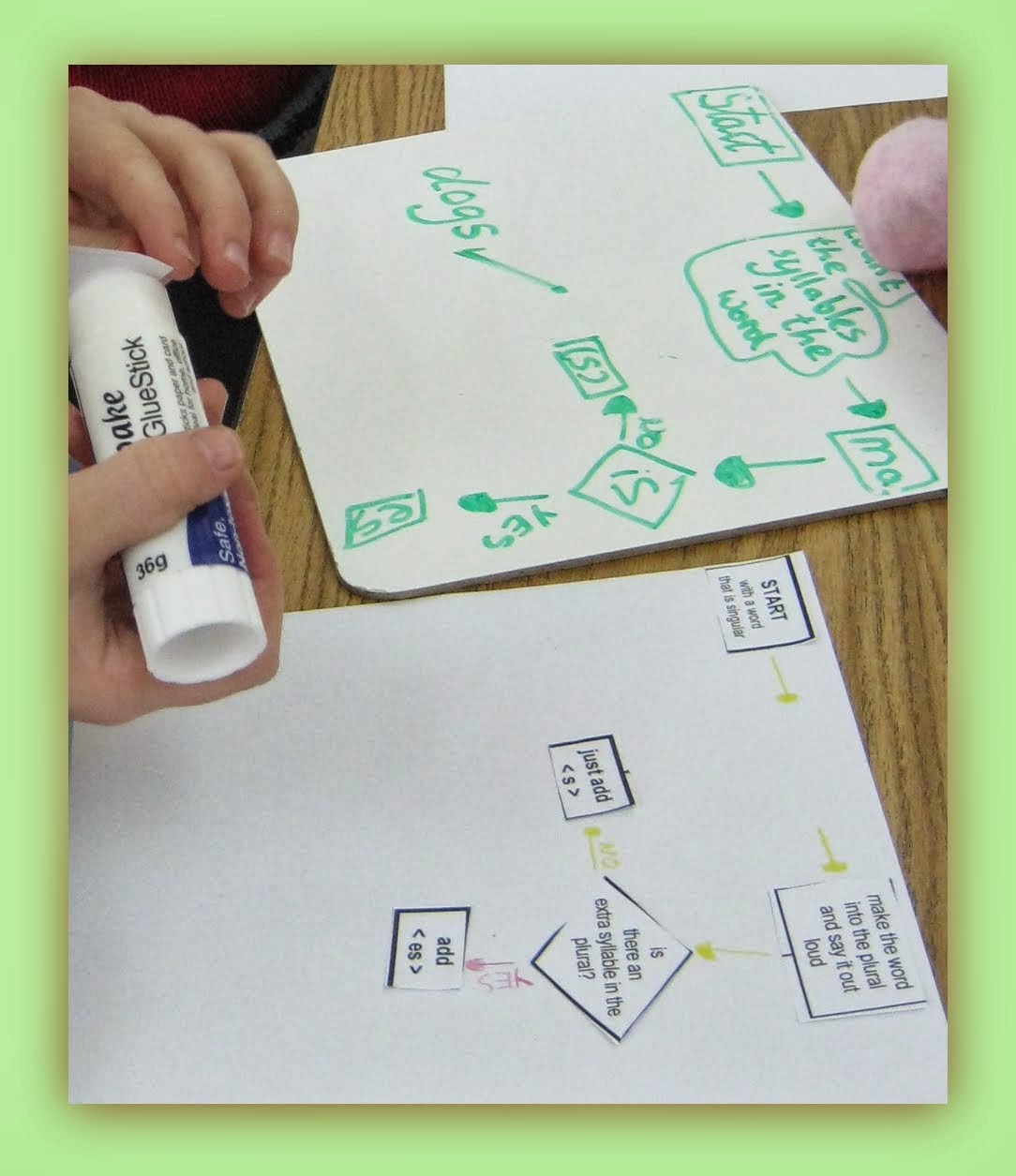 NB I have worked through this process with children ranging from grade 1 to grade 8. The activities and strategies are adapted according to age and learning needs.